The two-time TG4 All Star kick-started her glittering career with the Gaelic4Girls programme at club level with Shane O’Neills, and she’s a huge advocate of the scheme.

Over the next eight weeks, Aimee will release videos sharing some of the tips that have helped her to develop into one of the most feared forwards in the game. 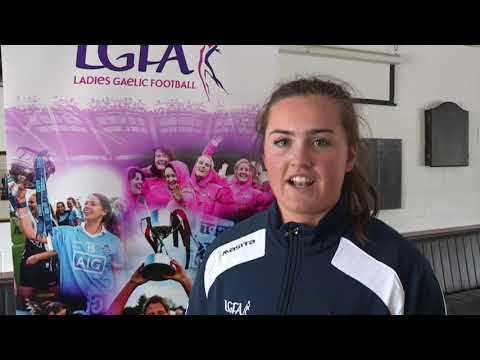 Aimee and the LGFA are now inviting participating clubs to share their journeys on the Ladies Gaelic Football Association’s various social media platforms.

Aimee said: “I started my journey right here at my own club, as a Gaelic4Girl.

“I’d highly recommend the programme for any young player looking to start out on their journey.

“Gaelic4Girls learn the skills of the game through fun games and activities.

“Through the programme, I learned the skills of the game and made life-long friends that I still play with today.

“Over the next eight weeks, I’ll be sharing some video and skill challenges that helped me improve.”

Gaelic4Girls, which gets underway next week, is celebrating its ten-year anniversary and this year, 43 clubs across Ireland and Britain will benefit from the hugely-successful initiative.

Gaelic4Girls has been a huge success for the LGFA in Ireland and also received a fantastic response in Britain when it was first piloted there in 2015.

For 2018, 33 clubs across Ireland have been selected from 21 different counties while in Britain, 10 clubs from three counties will participate.

Leinster will be represented by ten clubs from seven counties, while nine clubs from six counties in Ulster will participate.

Participating clubs can share their video stories on the LGFA’s social media channels:

The full list of participating clubs reads as follows:

The selected clubs have attended training evenings before the programme is rolled out from next week.

Gaelic4Girls 2018 will culminate with blitz days in each of the provinces later in the year.

Gaelic4Girls: Celebrating 10 years of increasing participation and growth in clubs across Ireland and Britain.

16 August 2022
MEATH star Niamh O’Sullivan has been honoured with The Croke Park/LGFA Player of the Month award for July 2022. The 32-year-old Dunshaughlin Royal Gaels player produced a blistering performance in...

16 August 2022
59 clubs, representing 25 counties, were afforded the opportunity of playing at Croke Park on Monday August 15. The Ladies Gaelic Football Association was delighted to see the return of...

15 August 2022
LAOIS star Mo Nerney has claimed the ZuCar Golden Boot award for 2022 - the prize on offer for the leading scorer in the TG4 All-Ireland Championships. Nerney's tally of...
all related news