Home > Limerick legend O’Brien: Interfirms medal is ‘right up there’ with previous achievements
29 May 2018

Limerick legend O'Brien: Interfirms medal is 'right up there' with previous achievements

LIMERICK legend Dymphna O’Brien rates winning an LGFA Interfirms medal with AIB “right up there” with anything she’s achieved over the course of a glittering career.

O’Brien struck a stunning winning goal on Saturday as AIB defeated An Garda Síochána by 2-4 to 2-2, in what was a repeat of last year’s final between the teams.

For O’Brien and AIB, it was a second successive Interfirms title and the Gerald Griffins player was overjoyed to play a key role.

O’Brien, a 2010 TG4 All-Ireland junior medallist with Limerick, said: “It’s right up there with any All-Ireland medal or any of the medals I’ve won. 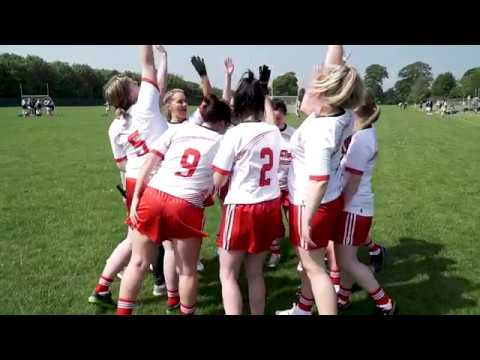 “It’s a great way to build relationships within the organisation that you’re working for, and to build up a network.

“It was a really enjoyable day for us and good fun.

“We were delighted to win it last year and over the moon to win it again.

“We went up with the intention of winning back-to-back titles and that’s what we did.”

O’Brien noted: “The standard was higher than last year. We just happened to have a good strong group playing at club level but with a bit of training, every organisation can get to that level.

“This competition is sustainable and something that can grow.

“Everything was run brilliantly, there were no delays and it went so smoothly.”

From early in the day at Naomh Mearnóg in Portmarnock, it became clear that An Garda Síochána and AIB would be in the shake-up for final glory.

In the Shield Decider, University Hospital Waterford ran out winners against the Irish Prison Service, before AIB defeated An Garda Síochána in the Cup final.

15 August 2022
LAOIS star Mo Nerney has claimed the ZuCar Golden Boot award for 2022 - the prize on offer for the leading scorer in the TG4 All-Ireland Championships. Nerney's tally of...

15 August 2022
USGAA is about to embark on one of the most anticipated weekends of the year, the USGAA Finals, which will take place in Gaelic Park, Chicago starting with quarter finals...

Peter Lynch returns as Down manager

15 August 2022
Down LGFA Announce new Senior Ladies Manager  Statement via Down LGFA.  We are delighted to welcome Peter Lynch back as our Senior County Manager. Down LGFA Chairman Stephen Magorrian said:...
all related news