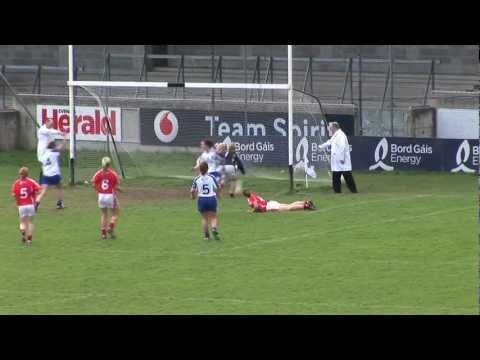 Claiming their first league title since 1999, Monaghan dominated Cork throughout the second period but were kept on the edge of their seats when Nollaig Cleary found the net for Cork with ten minutes remaining.

The worry was doubled four minutes later when Valerie Mulcahy stroked home a penalty after a foul on Juliet Murphy to reduce the deficit to three points, but the superb Cathriona McConnell step up with the late point to seal the win.

Entering the tie as underdogs, Monaghan tore into the Leesiders from the first whistle with their high intensity play and tenacious tackling upsetting the Rebelettes.

Making a switch from the off that saw Laura McEnaney start in the half-forward line brought immediate dividends for Monaghan as Niamh Kindlon slotted an early free that McEaney earned.

That lead was soon two points when Cathriona McConnell pointed after a quick free unlocked the Cork defence nine minutes in.

The intensity that Monaghan was showing at the back was a feature of the early exchanges, but 11 minutes in Nollaig Cleary finally made the Cork breakthrough with a well-taken point.

But that score proved a brief interlude as Monaghan pushed on with their best spell of the half that produced three points in five minutes.

The first arrived from McEnaney – daughter of Meath manager Seamus – after the ball broke kindly off full-forward Kindlon in the 11th minute. Kindlon added two more in quick succession, including an excellent point from more than 30 metres after McConnell battled well to gain possession to push the lead out to four points.

However, slowly but surely Cork began to pull themselves back into the game and they could have pulled within one point, but Monaghan goalkeeper Linda Martin pulled off a splendid save to deny Rhona Ni Bhuchalla a certain goal.

Juliet Murphy gained some consolation for Cork from the quickly-taken ensuing 45 and after McEnaney kicked her second point in reply for Monaghan, Cork took control.

Orlagh Farmer started the good run for Cork with a point to cap a fine run from Ciara O’Sullivan and further scores from Cleary and Murphy ensured that Monaghan led by just 0-6 to 0-5 at half-time.

Kindlon carried on where she left off after the restart with a well worked score to push Monaghan two points clear, but the key score arrived in the 37th minute when Cathriona McConnell goaled for Monaghan.

Cork keeper Elaine Harte did well to deny McConnell with her first effort, but after she regained possession, her rebound was deemed to have crossed the line after rattling the underside of the crossbar.

The goal swelled the Monaghan belief and a run of points from the outstanding McConnell pushed them into a 1-12 to 0-6 lead.

But it was never going to be easy for Monaghan and when Cleary’s goal was quickly followed by Valerie Mulcahy’s penalty the lead was whittled down to three points.

But McConnell stepped forward again and her fourth point of the day sealed Monaghan’s first division 1 title for 13 years.

30 June 2022
Eighty-eight club sides from Ireland, the UK, Europe and US will compete in the John West Féile Peile na nÓg Gaelic football and Ladies football Finals 2022 across nine venues...

30 June 2022
FIXTURE details have been confirmed ahead of the 2022 TG4 All-Ireland Intermediate and Junior Championship semi-finals. All four games will be played on Sunday, July 10, and will be available...