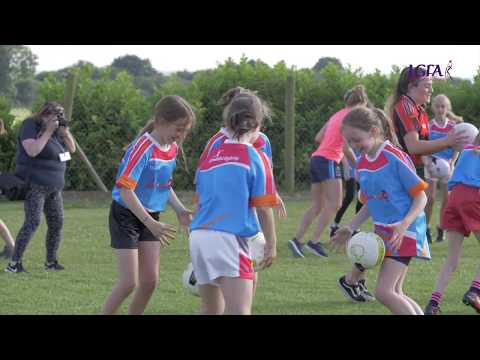 THE Ladies Gaelic Football Association’s 2018 Gaelic4Girls programme has proven a huge success in 43 clubs across Ireland and Britain.

2018 saw the LGFA celebrate the 10th anniversary of the scheme, with Armagh star Aimee Mackin acting as Gaelic4Girls ambassador and featuring in a series of hugely-popular promotional videos.

In Ireland, 33 clubs representing 21 counties took part in the Gaelic4Girls programme while in Britain, 10 clubs from counties London, Warwickshire and Scotland participated.

Over 1600 girls aged between 8-12 years participated in Gaelic4Girls – a huge number of players who have been exposed to Ladies Gaelic Football and a club setting for the first time.

The selected clubs attended training evenings before the programme was rolled out.

“Gaelic4Girls is a club-based programme. It’s 12 weeks and what it involves is the club running an eight-week programme initially,” explained Aisling Doonan, the LGFA’s National Development Officer.

“They deliver fun games so the girls get an opportunity to have fun and learn the skills of the game, all through games.

“It’s not drills-orientated. After the initial eight weeks, they then integrate into existing clubs, weeks 8-12.”

The 12-week programme included provincial blitzes, where players had the opportunity to represent their clubs and showcase the skills they learned in that fun and non-competitive environment.

As Gaelic4Girls ambassador, two-time All Star Mackin was a fitting candidate for the role.

Ten years ago, Mackin began her football journey as a Gaelic4Girl when her club, Shane O’Neills, delivered the programme.

The Gaelic4Girls programme has been proven to increase numbers in club while coaches are provided with the training, resources and support required to set up and implement the programme.

The programme can also be used as a tool to source new volunteers and to get parents involved.

Resources, training and support are also available to set up and sustain a successful school-club link in local communities.

The province of Leinster was represented by ten clubs from seven counties, while nine clubs from six counties in Ulster participated.

The full list of participating clubs was as follows:

Gaelic4Girls: Celebrating 10 years of increasing participation and growth in clubs across Ireland and Britain.

11 August 2022
The Irish Times Sport Ireland Sportswoman of the Month for July 2022 is Meath Footballer Niamh O’Sullivan. Congratulations to Niamh O'Sullivan and her Meath team mates for claiming the TG4...